We are pleased to announce the ambassador program will return for the 2022 Gorham Savings Bank Maine Marathon.


Now in its fifth year, the Race Ambassador program is meant to inspire, motivate and encourage runners. Race Ambassadors are super-fans of the Maine Marathon and are eager to share the event with others online and in real life. That might mean leading a group run, holding an information session outside of Maine, or sharing their training regime through social media. 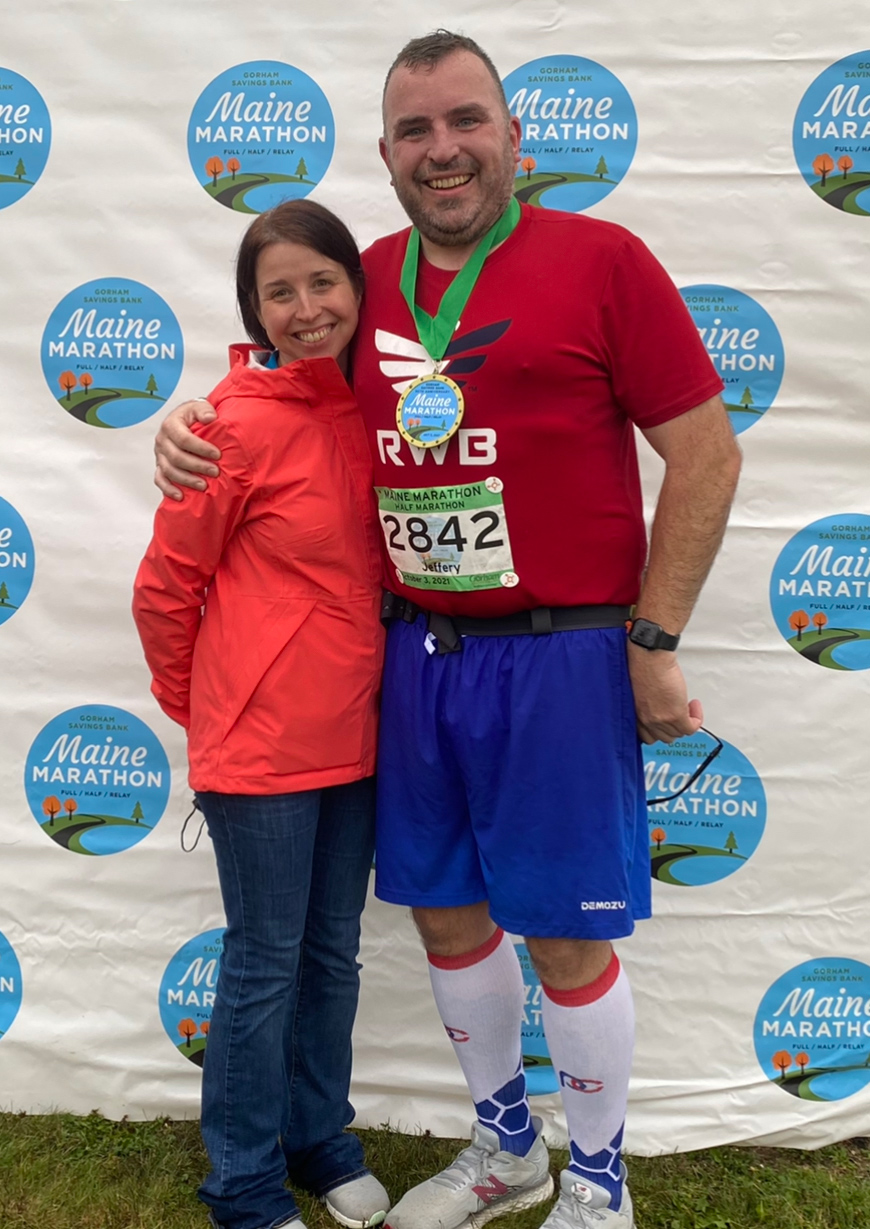 Jeff (he/him/his) is a native of New England. He grew up in Vermont and lived in New Hampshire before settling in Maine. Jeff recently retired from the US Army and jokes, “when I was forced to run in the Army I naturally did not enjoy it, but now that running is my choice, I love it!” Jeff is a Registered Nurse in the Maine Health system and works part time as a Paramedic. Jeff and his wife Katey live in Gorham along with their dog Brandy. They are expecting their first child, a son, in August, and are excited to have him cheer Dad on!!

Jeff is on a mission to share his experience with others and hopefully open new doors to people facing similar circumstances. “PTSD has taken so many of our Brothers and Sisters too soon, both from the military and other First Responders. Running has given me another tool in my kit to control my symptoms. I’ve found a new purpose and a new community which has quickly become my tribe. We all work together to lift one another up” Ballard said. “I just want the average person to know they too can be runners. Your pace doesn’t matter to anyone, showing up does”.

Jeff discovered his love of running in 2021 after a “wake up call” at his annual physical. He realized that middle age and a sedentary lifestyle was quickly catching up with him and he needed to make serious changes before it started taking a toll on his health. He joined Orangetheory Fitness and shortly after did his first 5k in many years. From the first race he was hooked and decided to train for and compete in the Maine Marathon Half Marathon.

While running Jeff realized that his PTSD was easier to manage and his physical health was improving. Jeff enjoys running with Team Red, White & Blue which is a nonprofit organization of both veterans and their supporters that has a mission of enriching veteran’s health and wellness.

Now Jeff is excited to be training for and running in his first full marathon. He chose the Maine Marathon to be his first marathon since Maine is his home and the connection he feels to the Maine Coast. 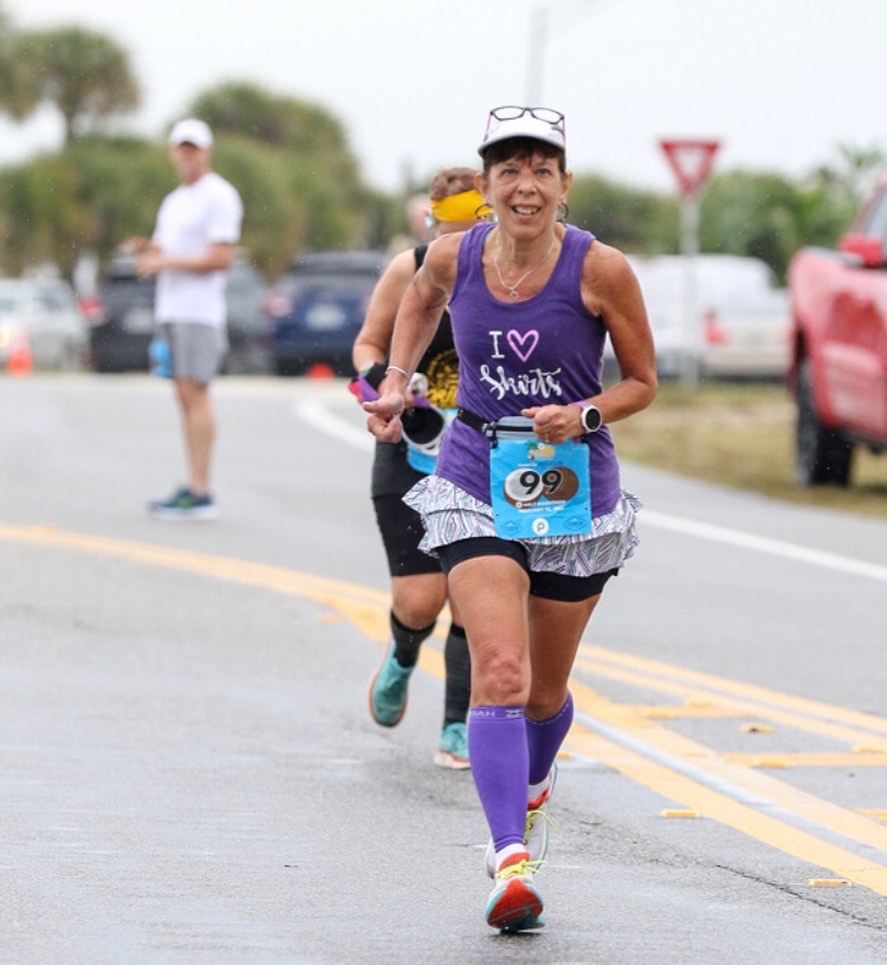 Darlene (she, her, hers) is a lifelong New Yorker and an adult onset runner. She started her running journey when a friend from her USTA adult tennis team begged her to join a 5k training program. Darlene ran that first 5k race and fell in love with the sport. In fact, she usually runs over 30 races (of varying distances) each year.

Darlene has completed over 50 half marathons (and one full, NYC, of course.)  A half marathon in Maine has always been on her bucket list so she is very excited to run this race.

Darlene’s favorite thing about running is the people she has connected with, both in-person and virtually. The running community is the best. She is proud to have been selected as a Maine Marathon Ambassador and to share her running adventures with even more runners.

Darlene currently lives outside Albany, NY with her husband and two cats. 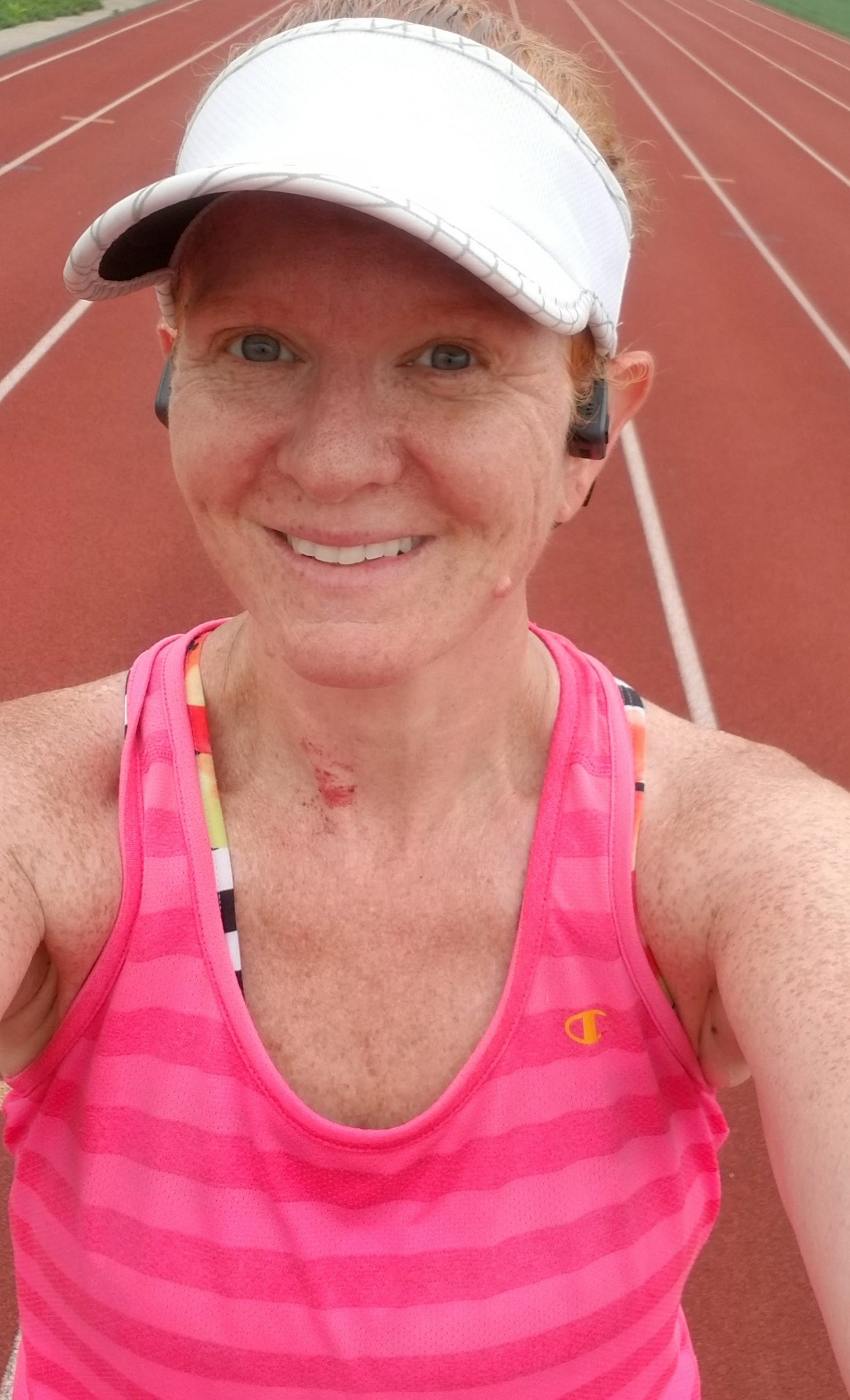 Cathy is honored and excited to be selected as one of this year’s Maine Marathon ambassadors. In her youth she was a sprinter and loved nothing more than running the 100 meter dash on the track. She still loves the track and what it represents (speedwork makes the dream work), but spends most of her running on the road and sometimes on trails (but only if they aren’t too technical because the fear of falling flat on her face is strong).

Cathy has been running regularly for the past ten years and while she mostly logs miles because of the mental health benefit it provides, she also loves setting goals and then working hard to accomplish them. She loves the 5k distance because it’s short, sweet, and hopefully fast, but she surprised herself (and probably a lot of other people) when she started running other distances, including the 10k (her favorite, of course, is the Beach to Beacon 10k) and even a few half marathons (inlcuding two on this gorgeous course). The best part of both? Seeing her family AND the dozen donuts they brought for her at the finish line both times.

This year, though, Cathy has set the biggest (and scariest) goal of her running life. It’s a goal she’s been talking about (mostly to herself) for several years, but the time has finally come to make it a reality and put it in writing. She set the tentative goal to work toward running a full marathon when she turned 50 and, well, she hit that milestone in November of 2021. It’s so true that time really does fly, but now she is ready to work, learn, have a little fun, and hopefully inspire someone along the way.

Cathy appreciates any advice and support from others who have conquered the marathon distance, but she also wants to show everyone that age is only a number and it should never keep you from chasing a dream no matter how audacious it may seem.

She will be logging most of her training miles in the Waterville, ME area and if you’d like to follow along with her training, you can find her on Instagram at @cathyherard 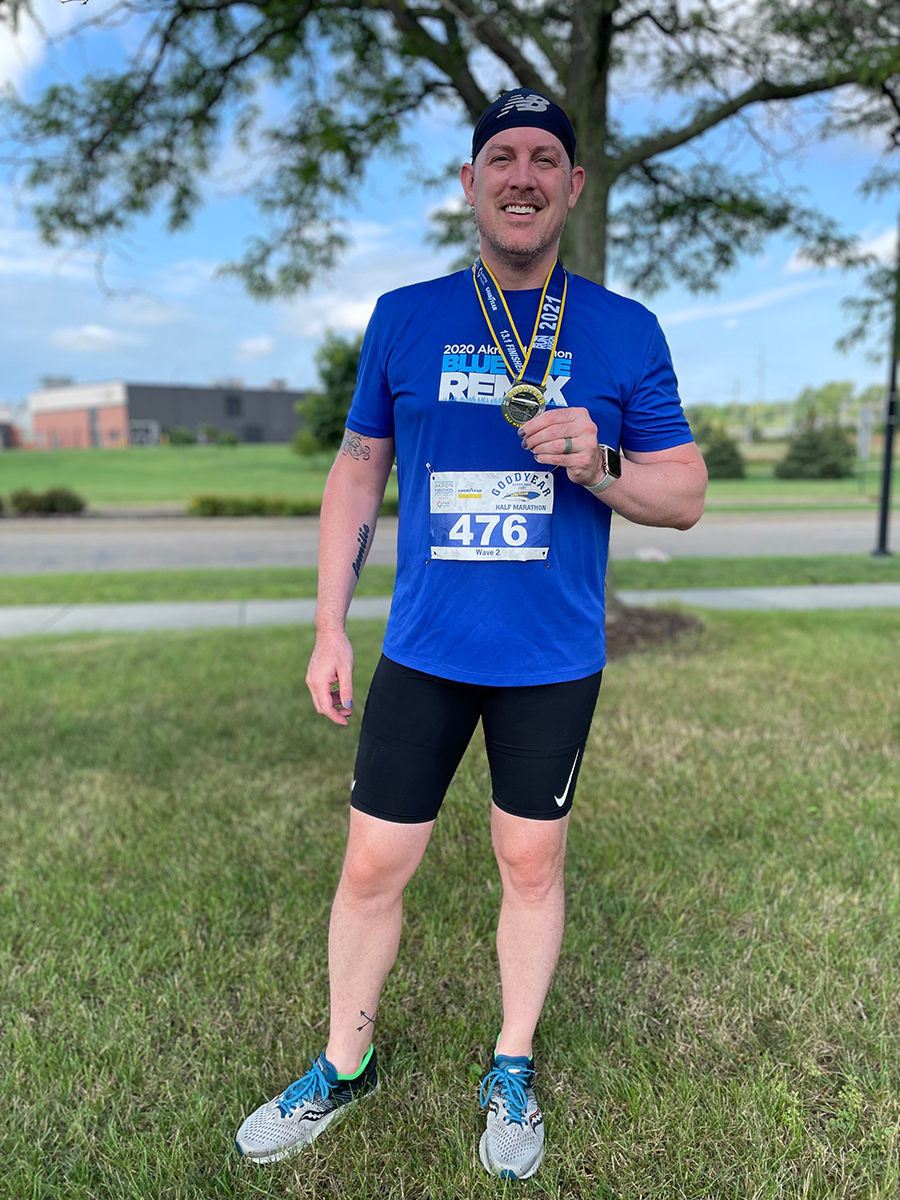 Chris (he/him/his) hasn’t always been a runner. But in 2013 Chris gave running a try as he was searching for an active way to eliminate the stress of everyday life and that is where his love of running began. As he dove further and further into running, he discovered the amazing running community and the benefits that are associated with being part of such a community. Running goals started out from running around the block without stopping, to one mile without stopping, then on to completing his first 5k and so on. Chris completed his first full marathon in 2014 in Indianapolis and as of today has completed a total of nine full marathons and 17 half marathons since.

Chris is excited to complete half marathon numbers 18 and 19 leading up to his 10th full marathon at the Maine Marathon! Chris has grown to love running for many reasons such as the supportive community, the feeling of self accomplishment and staying mentally healthy. If you see him out running you can bet he’s either having a good old therapy session or singing (awfully) along to one of his pop/country/rap combo playlists. 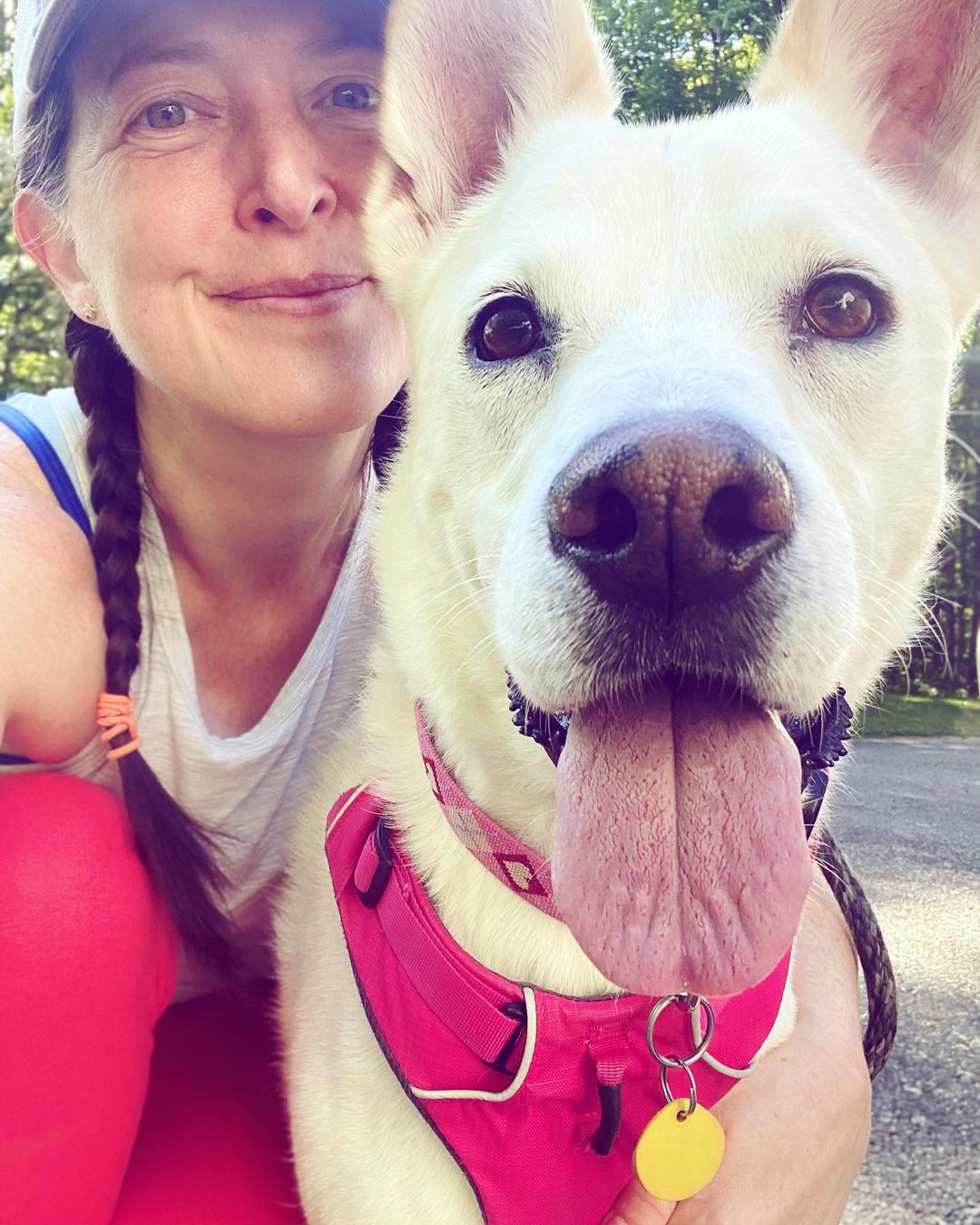 Erin Sampson (she/her/hers) has had a lifelong relationship with running and while it hasn’t always been consistent, she truly believes that every stop and start holds immense value. She ran her very first kids race when she was 11 and while she continued running throughout her academic years, it wasn’t until she moved to New York that she truly fell in love. She met friends for weekend races in the park, ran her first Half Marathon, ran back and forth across bridges, explored new neighborhoods, and found the rhythm and solace of one step after another.

After moving back to Maine in 2009, Erin struggled to find her happy running place. It wasn’t until 4 years ago that she finally dove back in, encouraged and inspired by a strong group of local runners (now called the Casco Running Club) who share the unofficial motto of ‘That’s a terrible idea, what time should I be there?’ In 2021, Erin introduced her pup Sierra (see photo) to running and training instantly took on a whole new meaning!

Erin had the immense privilege of running her very first Marathon last year right here in her home state, as a Maine Marathon Ambassador. This year, she’ll partner with a friend for the Maine Marathon Relay, running 3 legs (just over 20 miles) as her final long run in preparation for the TCS NYC Marathon in November. This particular race is nearly 20 years in the making and will reunite Erin with NYC, with the added benefit of raising money for Girls on the Run along the way.

Erin is enthusiastic, loves the energy of a true race-day, and can’t wait to run happy with all of you from right up through race day! She lives in Casco with her family (husband, 2 kiddos, and 2 dogs) and can usually be found running and parking lot brunching with the Casco Running Club!

To follow along on Erin’s training journey, you can find her on IG at @justplainlovely 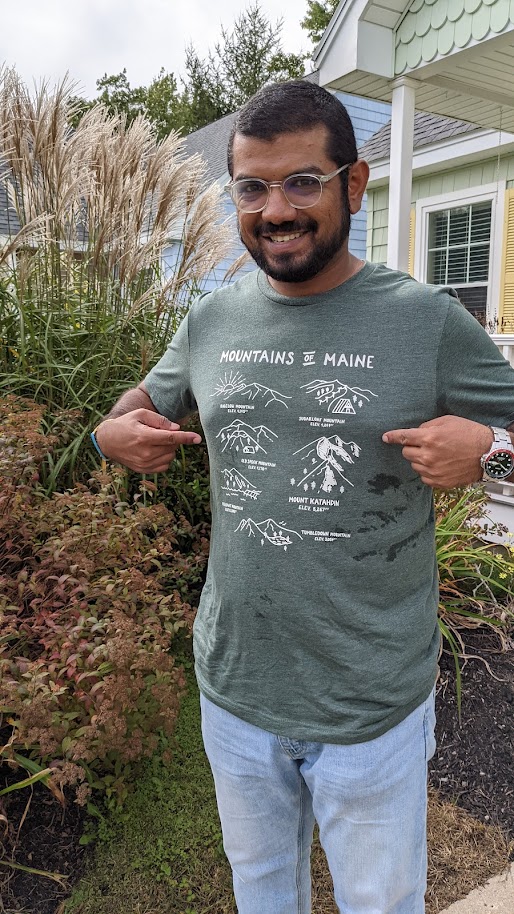 Adhirath is a not-so-recent Maine transplant from India. He is a Technology Analyst working for Hannaford, which was the reason for his move to Portland in 2017. He has been running for almost 2 years now, but definitely still counts himself as a very new runner. Running was never his favorite activity. Running was never his favorite activity. In fact, it was towards the bottom of the list of activities he would consider for his free time. But during the pandemic, he found a liking for running. Starting with a very basic goal of having a 1-mile time below 10 mins. After that, he took part in some 5Ks, and then he ran his first half marathon in 2021 on a whim and survived.

The half marathon is what changed his perspective towards running when he was introduced to the running community AND experienced the joy/excitement of being able to run a long-distance road race.

He has been running a little more consistently since then and plans to get through 2 half marathons in 2022 – Old Port Half in June and Maine Marathon Half! And then who knows, maybe a full marathon at some point?

To follow along with his training and maybe runable him into a marathon, you can find him at @think_mcfly__think on IG!

Thank you to our sponsors—we couldn’t do it without you!